The PowerXchanger® enables the use of appliances, electronics, and other products originally designed for use in North America to be used in the rest of world. The Xchanger operates from 50 Hz power sources with nominal voltages ranging from 200 Vac to 240 Vac. It then supplies a precisely regulated 120 Vac~60 Hz sine wave at the output.

The Xchanger is completely enclosed and suitable for use in kitchens, laundry rooms, basements, garages and other areas where the environment is not well controlled.

The PowerXchanger® uses a two-stage power conversion process to assure that the output voltage is precisely regulated and isolated from noise and disruptions on the input AC power source. As shown in the figure below, the input AC power is processed through an AC-to-DC power converter that assures the input power factor is as close to one as possible. This reduces the current on the input source, providing the environmentally friendly benefit of reducing the carbon emissions from the electric power provider.

The output of the energy storage bank is connected to a DC-to-AC converter (also known as an inverter) that generates a pure sine wave output of 120 Vac at 60 Hz.

Unless stated otherwise, these specifications apply for an input voltage of 240 Vac, an input frequency of 50 Hz, an output loading equal to 50% of the maximum rated, and an ambient temperature of 25 °C.

All PowerXchanger®s can indefinitely tolerate some amount of overload. If the output current drawn by the load exceeds the PowerXchanger’s over current alarm threshold (See “Overcurrent Protection Alarm Threshold” above) the white LED will blink every four seconds*. If the overload continues for more than one minute an audible alarm will sound as long as the overload is present. If the overload alarm continues for more than one minute, the Xchanger will turn off the output. After a 30 second delay, the Xchanger will turn the output on again.

If the PowerXchanger® detects that the output voltage is 60 Vac or less for at least 250 ms, that signals that the output is short circuited or extremely overloaded. If this happens the Xchanger will shut down and attempt to restart after 30 seconds.

If the Xchanger continues to overheat, it will eventually turn itself off to protect itself from damage. Once the Power Xchanger has cooled off sufficiently, it will automatically restart. 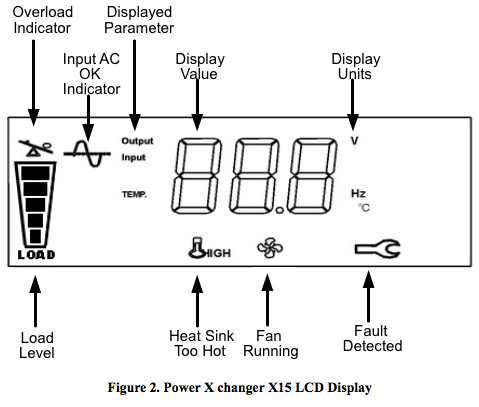 All units are designed to operate with natural convention cooling.

All PowerXchangers are warranted for full replacement for two years.

All PowerXchangers are manufactured in an ISO 9001 certified factory.

All PowerXChangers have been tested and certified or approved to the following standards:

All PowerXchangers have been tested and certified to comply with the following standards:

All PowerXchangers are compliant with the Restriction of Hazardous Substances Directive 2002/95/EC.